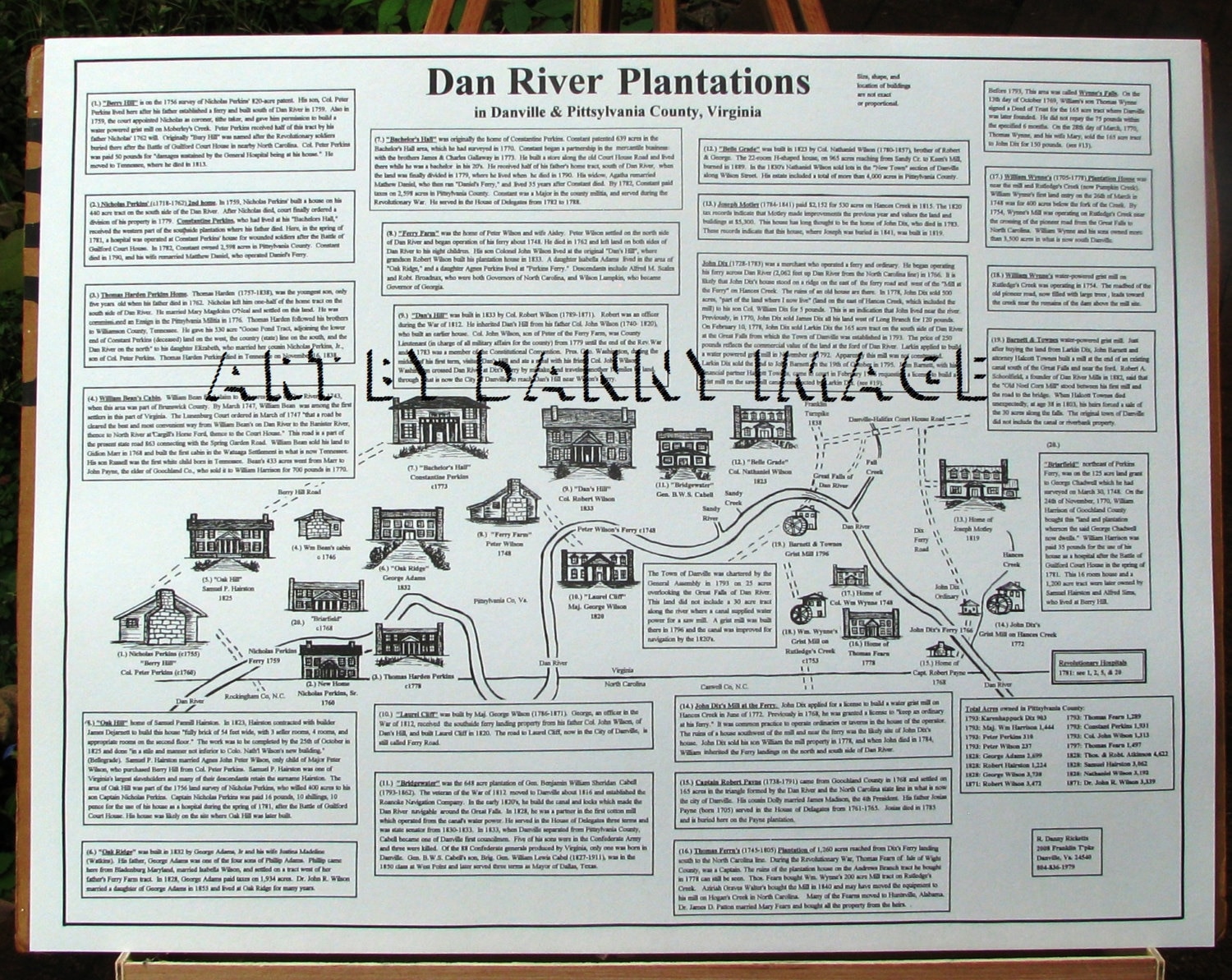 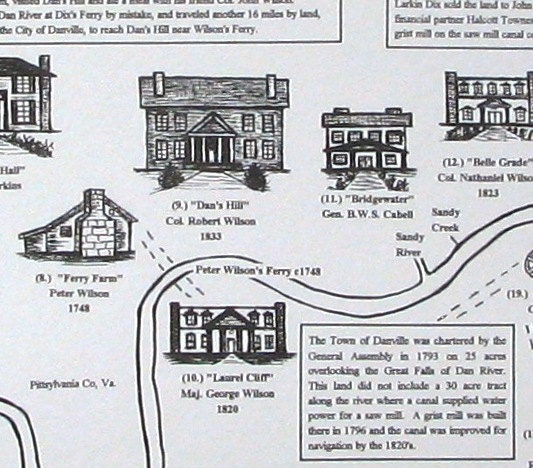 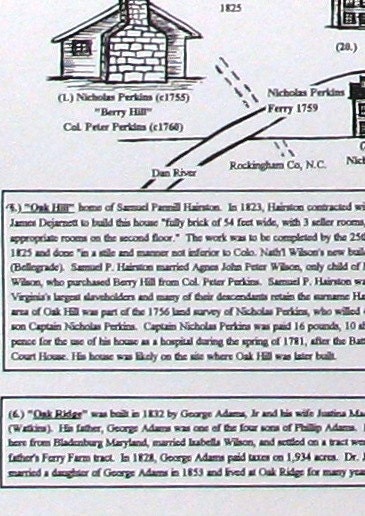 BERRY HILL was built c1760 and is still standing. The name is said to have originated from "Bury Hill" during the Revolutionary War. After the Battle of Guilford Court House, not so far away, soldiers were brought to the home which was used as a hospital. Those who died were buried there. Col. Peter Perkins was paid 50 pounds for damages sustained by the General Hospital being at his home. Col. Perkins sold his property here and moved to Tennessee where he died in 1813. His father Nicholas Perkins (1718-1762) lived nearby across the river. He operated Perkins Ferry near the line with Rockingham County, NC. Thomas Harden Perkins (1757-1838) lived east of his father's house. His father died when he was only five years old and left his half the home tract on the soutside of the river. In 1776 he was an ensign in the militia. He later followed his brothers to Williamson County, Tennessee. William Bean's cabin c1746 was located northeast on the old Berry Hill Road. Bean sold out and moved to Tennessee in about 1768. His son was the first white child born in the Watauga Settlement.

OAK HILL (1825) was the home of Samuel Pannill Hairston. He was one of Virginia's largest slaveholders and many of their descendants retain the surname.

BACHELOR'S HALL was the home of Constant Perkins. His land grant here was for 639 acres in 1770. He ran a store here on the Berry Hill Road. He was a major in the militia. Bachelor's Hall is still standing and occupied.

FERRY FARM was the home of Peter Wilson. He began his ferry about 1748. He died in 1762 and left land to his eight children. One of his sons was Col. John Wilson who was County Lieutenant during the Revolutionary War. When President George Washington came through this area in 1791, he ate a meal at the Wilson home. John amassed large tracts of land before he died in 1820. (sons Robert, Nathaniel, and George have homes listed here).

DAN'S HILL was built by Col. Robert Wilson in 1833. This is still standing in good condition. His brothers built Laurel Cliff and Bellegrade.

LAUREL CLIFF was built by Major George Wilson in 1820 across the river from Dan's Hill, near the southern ferry dock. Danville's Ferry Road leads to Major Wilson's former land. His brothers built Dan's Hill and Bellegrade.

BELLEGRADE (or Belle Grade) was built about 1823 in what is now Danville, Virginia. When Colonel Nathaniel Wilson died, his estate included 4,000 acres and 80 slaves, all names in estate papers. Bellegrade itself was 935 acres. His brothers built Dan's Hill and Laurel Cliff.

BRIDGEWATER was the home place built about 1827 on the 648-acre plantation of Gen. Benjamin W. S. Cabell. Cabell came to Danville in 1816 and was instrumental in constructing the Roanoke Navigational Canal (see #27) around the falls of Dan River. One of his sons Gen. William Lewis Cabell graduated from West Point in 1850 and was a Confederate General. He was later the mayor of Dallas. The Danville Mall is located on the Bridgewater home site.

The HOME OF JOSEPH MOTLEY (1784-1841) is east of the Danville airport. The house built in 1819 is often mistakenly called the home of John Dix, who operated a ferry and ordinary near his home on Dan River from about 1766.

The HOME OF CAPT. ROBERT PAYNE was near the Carolina line where the river reenters the state. His cousin Dolly Payne married President James Madison. The Paynes came here from Goochland county, Virginia.

The HOME OF THOMAS FEARN (1745-1805) was near the present Goodyear plant. He lived on a 1,260 acre tract and owned a 200 acre Mill Tract west on Rutledge s Creek. Most of Fern's descendants moved to Huntsville, Alabama after his death.

The HOME OF COL. WILLIAM WYNNE (1705-1778) was near the water-powered grist mill that was operating in 1754. His mill was among the first in what is now Pittsylvania County, Virginia.

BRIARFIELD was the home of George Chadwell which was built about 1768.

Another grist mill shown is the Barnett & Townes (1796) Mill in downtown Danville.

This poster is on heavy paper and measures about 22-1/2 inches x 17-1/2 inches. Our larger posters are shipped in a sturdy USPS PRIORITY MAIL tube for their protection. We are now using the new Etsy Calculated Shipping for our posters.

Since the 1970s, I've been designing history posters based on my research. Most of the information is from various public documents and records from the Pittsylvania County Courthouse in Chatham, Virginia. This county was established in 1767, but some documents I use pre-date that.

I have many posters about the Danville, Virginia and Pittsylvania County area in the History Posters section of my shop. A few of these are --

You may pay with a Credit or Debit card, or an Etsy gift card.
We also accept Paypal. It's not necessary to have a Paypal account in order to pay with Paypal.
Local Pickup - If you live in the Danville, Virginia area and want to pick up your purchases, we can arrange that. We will refund any shipping cost you paid, after your pick up.

Processing time is one to two days.

MULTIPLE ITEM ORDER:
---Large original paintings are packed and shipped separately, so we cannot combine the shipping on those.
---History Posters can be shipped together. We are now using the new Etsy Calculated Shipping for the history posters. These posters ship in a sturdy Priority Mail tube mailer. Remember that, let's say you wanted several history posters, for gifts or for yourself, if you buy 7 that would be $35 and you would get free shipping on the posters.

History Posters and Unframed Art - In shipping multiple posters and/or Unframed art in the same shipment, we will refund excess shipping. Paintings will be shipped separately due to the packaging required to protect your paintings.

International buyers are responsible for any custom duties, taxes, levies and/or fees.

Ship items back to me within: 30 days of delivery

Request a cancellation within: 6 hours of purchase

But please contact me if you have any problems with your order.

The following items can't be returned or exchanged

Because of the nature of these items, unless they arrive damaged or defective, I can't accept returns for:

Questions about your order?

Please contact me if you have any problems with your order.

DAMAGED IN SHIPPING: I will pack your original art, print or poster with the utmost care. In the unlikely event that your item is damaged, please contact me within ten (10) days from the date you received it. For original art, please send me photos of the damage. We take special precautions, but if something happens during the shipping process - whether by USPS or other carrier - we will work to resolve the issue as quickly as possible, with a sincere desire to give you a positive buying experience.

RETURNS: We almost feel as if we're sending you part of our family. I didn't want to sell anything for a long time until we ran out of room. I hope you will love the artwork and other items as much as we do, but if you are not happy with your purchase, please send me a message and return the item within two weeks (14 calendar days) from the date you received it. Please note that in the case of Returns, the item must be returned in the same condition it was shipped, and the buyer pays return shipping costs. All returned items must be packaged safely.

Great illustration of local history and a treasure for the family tree!

0 items in your cart